Gai Fong, where is the Gallery? 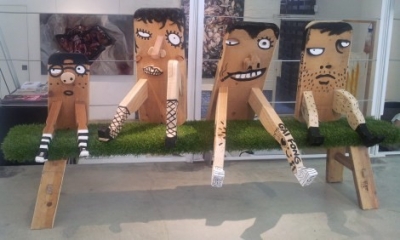 “Excuse Me, where is the market?”

This is the title of an exhibition in a Wan Chai gallery. Before seeking for an answer, I would ask “which market is it?” and “who asks whom?” from the exhibits.

“Market” serves a main purpose of buy-and-sell. The mechanic geek Roy Ng illustrated trading in market by pots of mimosa constantly being touched by feather on rod. The movement of the device and the gentle touch of the feather were so captivating that one may easily follow its pacing and immerse in an ambience only found in a traditional market: buyer and seller greet and chat, tease the cat, do a bit more chatting before purchasing. On a slothful afternoon, a shopper may stop by the next shop as if a gallery visitor observes another pot of mimosa. Wong Ka Wing was also inspired by street-level shops through his lens-less DSLR camera. As such, only light and shadow in shop fronts were captured as patches of colour. From this buy-and-sell perspective to locate the “market”, I wonder if mimosa and street-level shops have evolved that the former becomes insensitive to stimuli and the latter extinct. 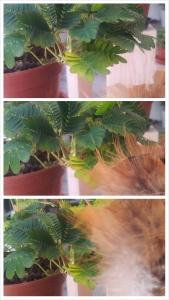 “Market”, by another definition, is where food is sold. For those who buy food at supermarket, wet market can be a fountain of inspirations. Vivian Ho’s paintings depict bloody meat and guts larger than life whereas KACAMA collected onion skin and presented a natural dyeing process. Both works focus on a fundamental way of art viewing – visual elements like line, colour and texture.

Alternatively, “market” is an assemblage of people. Neighbourhood (Gai Fong街坊 as used in the title) is not only a theme but a creative process of Wong Tin Yan’s new series of work. Wong created gai fongs with his favourite remaining wood and folding stools with a gai fong in Wan Chai, Master Lung; a market or a neighbourhood is formed in real life and through the artwork. Bench Gai Fong (cover image) was particularly hilarious because of the characters. “Where can I find the one wearing net stocking or the hairy-legged one in Wan Chai?” I smiled.

The curator says “gallery”[1]. The gallery indeed locates at a small community where the “blue house” rooted almost a century ago in southern Wan Chai. However, a gai fong may have a very different view.

Just a couple of weeks ago, I joined a docent tour organised by Hong Kong House of Stories (香港故事館) in Wan Chai. The docent Sau-ping has lived in the district for 40 odd years and I can imagine she has a lot to say what a community is about. In her eyes, ironmongers and car-repairers are part of the neighbourhood, but never a 25-storey hotel soon to be built among 4-storey tenement buildings on Kat On Street (吉安街). It is not difficult to imagine tourists will bring in more cafés, restaurants and bars by sacrificing old shops and losing old gai fongs. 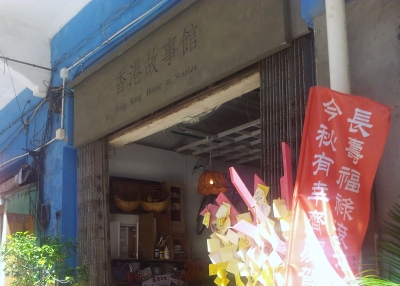 House of Stories in Blue House

Heritage shops, old markets, and our neighbourhood have been moved or pulled down throughout the years. The ecology is evolving like shops no longer at street-level and wet markets being replaced by supermarkets in shopping malls. But more often we persuade ourselves “change is eternal; improvement is inevitable”. Having witnessed urban redevelopment plans here and there, people no longer feel itchy or threatening. We act like an unreactive mimosa that we are not capable of recognising and reacting to our surroundings. A soft feathery threat does not hurt until it becomes too many too late.

Just a wild thought: Can we put a gallery in a market?

[1] “A gallery is a part of the community” from the curatorial statement by Reds Cheung, curator of “Excuse Me, where is the market?”

討論作品：《Excuse Me, where is the market?》